Born February 4, 1938 – Deceased July 20, 2018
"Those who knew Dr. Radzilowski well will miss him for his charm, his sense of humor, his countless stories, his sharp mind, and his infectious cheerfulness."
​– Piast Institute 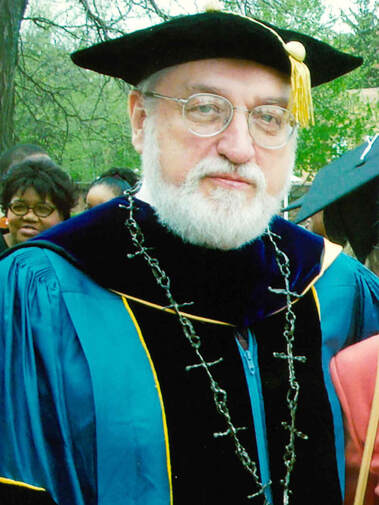 Dr. Thaddeus C. Radzilowski was the President/co-founder of the Piast Institute and President Emeritus Of Saint Mary’s College.  He held a Ph.D. in History from the University of Michigan. He has taught at Madonna University, Heidelberg College and Southwest Minnesota State University (SMSU).  At SMSU, he served as Chair of the History Department, Director of the Regional History and Rural Studies Centers and Associate Vice President for Academic Affairs. From 2003 until 2018, he had been a Lecturer in History at the University of Michigan–Dearborn. From the university he received an award as Mentor of the Year for 2017 and 2010 for his work and guidance to interns and students.

He has also served as Special Assistant to the Chair of the National Endowment for the Humanities and Endowment’s liaison to Ethnic and Community groups in the U.S. He was for two years the Acting Director of the Immigration History Research Center of the University of Minnesota.  He was Professor Emeritus of History at SMSU.

Dr. Radzilowski had authored over 100 articles, book chapters and monographs, written dozens of reviews and edited several collections. He has written extensively on the history of Russia and East Central Europe and on migration from Eastern Europe. His work has included articles on Poles, Jews and other groups in the region. His books include Feudalism, Revolution and the Meaning of Russian History (1994) The Polish Presence in Detroit (2001).  He has written, produced and consulted on a number of radio and television productions and films including two award winning PBS films, Out of Solidarity: Three Polish Families in America (1986) and Dealers among Dealers (1995) with Gaylen Ross.  He also served as advisor and researcher to the A&E Reports program Swiss Gold on the assets of Holocaust victims in Swiss banks.  The program won an Emmy for Research. He also co-wrote and narrated an hour long TV special “Our Polish Story”. It has often aired on the Detroit ABC affiliate and Detroit Public Television.

Dr. Radzilowski served on the editorial Board of the Polish Review and has been a consultant for the State of New Jersey and a number of cities and school districts in Minnesota on ethnicity and pluralism.  He has been an advisor and consultant to the U.S. Commission on Civil Rights and the U.S. Bureau of the Census. Dr. Radzilowski was the Piast Institute’s Director of Research for its projects on ethnic groups and American Pluralism. He has written extensively on relations between African Americans and Immigrants. He also headed the Institute’s Census Information Center (CIC).  His most recent work is the widely acclaimed, study Polish Americans Today (with Dominik Stecula).  Between 2005 and 2010, he served as the Co-Chair of the National Polish American Jewish American Council (NPAJAC). Dr. Radzilowski has lectured in Europe, Canada and the United States. He co-directed a special program on Business and post communism in East Central Europe at the Wirtschafts Universität wien in Vienna (WU Vienna University of Economics and Business).  He also chaired an International Conference on Migration at the Jagiellonian University in Kraków, Poland in 1986. He was the Keynote Speaker at the Berlin Pre-Summit meeting of the Association of Migrant Groups in Germany in 2009.

Dr. Radzilowski was named to President William Clinton’s advisory transition team on U.S. policy in Eastern Europe (1991).  He has been the recipient of numerous awards including Distinguished Faculty Award at SMSU and the Haiman Medal of the PAHA for distinguished contributions to the writing of Polish American history. In 2012, Dr. Radzilowski was awarded the Dr. Joseph Jachimczyk Award for his contributions to the Enhancement of American Polonia by the National Medical and Dental Society. On February 3, 2013, he was the recipient of the Lech Walesa Media Award for his life time achievement in the propagation of Polish Culture in the World presented by Former President Lech Walesa in Miami, Florida. Dr. Radzilowski was awarded "Outstanding Pole" in America on May 6, 2016 at the Consulate General of the Republic of Poland in Chicago in the category of Education ("Nauka").

He served in the U. S. Army in Okinawa and Vietnam. He holds an Honorable Discharge.